baltimore chickens: life in the coop 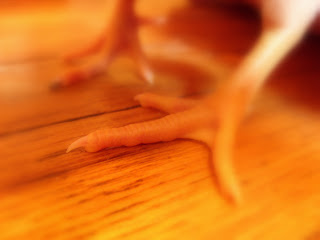 drama in the coop…

we’ve had a few lineup changes. as the ‘girls’ approached five months, things really got interesting! first, gertie [ameraucana] started to CROW! oy, it was out of nowhere and…it was loud. she [well, he…] was quickly taken back out to the country where that sorta behavior is a-ok. my neighbors have been so nice, so i wanted to make sure we had no more early morning wake up calls.

i had long suspected gertie was a rooster, due to the fact that he was always ‘odd man out’ from the other three…they wanted nothing to do with him. when i dropped him off, i was actually sad. gert had been my fave…the prettiest, easiest, sweetest. and would have laid blue/green eggs…the whole thing was a bummer.

coming home in gertie’s place, was edith. she’s brown and quite beautiful. and a total spaz – and afraid of everything, everyone. i think once she gets more used to her new city home, i think she’ll be more fun and saucy. 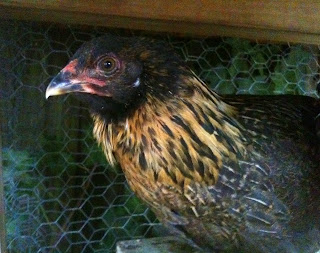 when i brought edith home, clara [very bossy rhode island red] became quite aggresive and wouldn’t leave edith alone for a second. i scooped edith up and put her in a separate area to catch her breath. tried again the next day and it was even more dramatic. so, i called an old friend in my hometown who is a more experienced chicken keeper and she was willing to take her. we’ll see what happens. when i left clara in kingsville, she was doing fine. my friend emailed me recently to say she suspects clara might be a clarence. we will see.

now…in clara’s place [man, this is like menudo or something…], comes agnes. only took me twenty minutes to catch her – i thought that was pretty good. i wonder how long it took rocky. what a workout. here’s agnes: 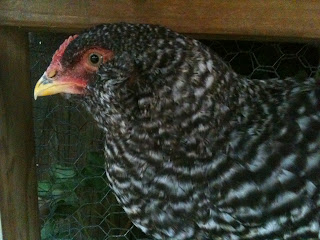 with all of these changes, my girls dottie and millie are being pretty good. a few little chases and intimidating ‘i was here FIRST!’ sorts of actions…but nothing too scary. edith might have a different take on that…

so, it’s one day at a time here on my little urban farm. they’re keeping me on my toes fer sure. henry, my 4 yr old yellow lab, is also rolling with the punches. he’s been quite sweet, actually. what a good dog. here is a photo i will cherish…me with henry and gertie. 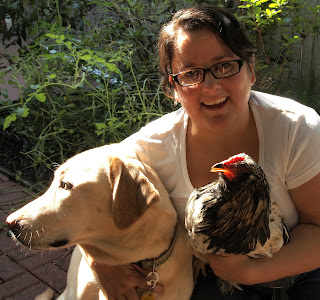 my favorite beef stew
Next Post: Getting Ready for Thanksgiving