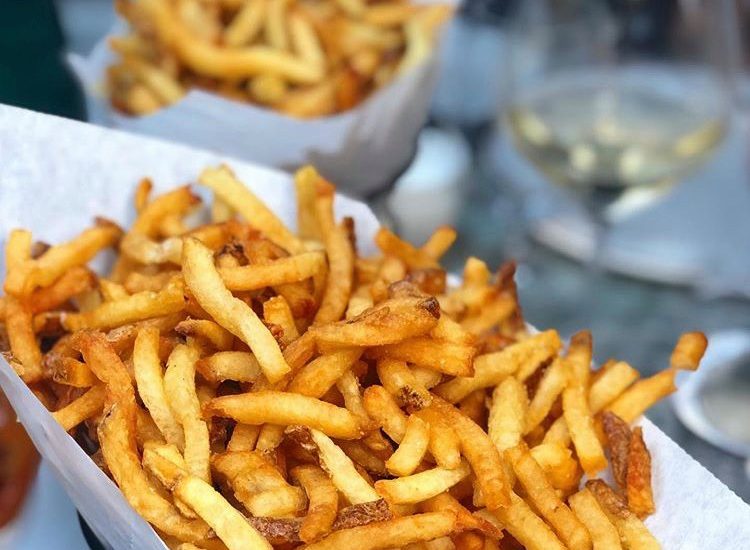 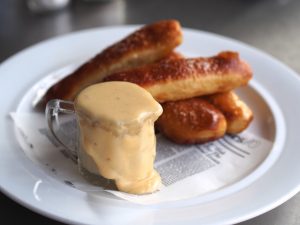 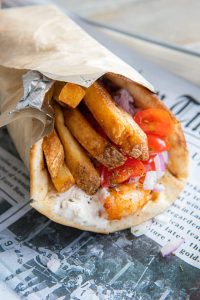 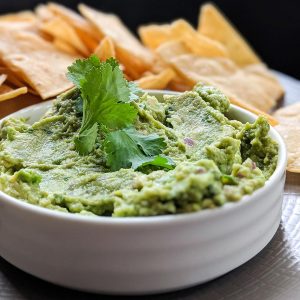 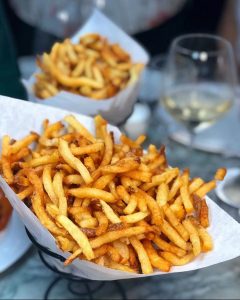 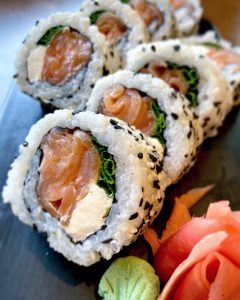 I asked parents, aunts, uncles, grandparents, caregivers, etc for recommendations for restaurants and dishes in Baltimore City that kids love. So many great suggestions, even a few fancy ones! Read on …

Margherita pizza from Verde, charcuterie and the pasta with tomato and basil at Cinghiale, avocado rolls from Nanami, pizza and pasta at Tutti Gusti, mac and cheese from Mission BBQ and ice cream from Pitango is his absolute favorite (and Mom’s, too.)

Quesadillas and tacos and refried + black beans from Papi’s in Fells/Hampden are always loved by my girls.

Mac and cheese from Rocket to Venus (our son calls it the Mac and Cheese store,) Common Ground is “the muffin store” and they do steamed milk as “kid coffee” to go with his muffin. Shrimp Pad See Ew from Bodhi Corner and shumai from Yama and 18-8 Sushi.

My daughter loves the kids fried chicken meal at Silver Queen. She thinks they have the best mashed potatoes in Baltimore. For lunches, the Hawaiian poke bowl at Hilo at R House and also John Brown Coffee for the best hot chocolate. For breakfast, the cured salmon from Corner Pantry. For a special meal, the cucumber salad and steak frites from Petit Louis. She is also a big fan of the crab cake at Koko’s.

When my 10-year old niece stays over, she always requests we order the Chicken Bacon Ranch Fries from The Local Fry.

My girls are fans of the zucchini balls platter at Souvlaki. They would eat the tzatziki sauce straight if I let them.

Both Captain Larry’s and Park Bench in Riverside are super kid-friendly spots that my kids love. We take them to Hersh’s as well when we want a nice meal. And, veggie fried rice from Thai Street and pierogi from Sophia’s Place. Plus crab cakes and mac and cheese from Faidley’s, the platters are big enough to share.

Prosciutto wrapped mozzarella, shrimp cocktail, lobster mac and the chicken sandwich at The Capital Grille. Spaghetti and crab meatballs, the Baltimore Club, mozzarella sticks, soft pretzels, burgers and anything from the brunch menu at The Food Market. Lobster Roll and fries from Thames Street Oyster House. Breakfast sandwiches, pancakes and waffles on the brunch menu at Rye Street Tavern. Meatballs from Joe Benny’s. Pizza from the Wanna Pizza This food truck and the Tortellini ala Crema from the Pasta La Vista Baby food truck.

My niece and nephews beg for boneless wings from Delia Foley’s every time they sleep over.

My kids love the mac & cheese with a side of apples or green beans at Johnny’s in Roland Park. And, the kids pizza meal at Birroteca in Hampden — great size, plus delicious fruits & veggies. Also the kids menu at Papi’s Tacos in Hampden (tacos & quesadillas) & Namaste in Roland Park (mango chicken dipped in naan is their favorite).

Belvedere Square / R House – both markets are favorites for my family. My oldest daughter especially loves Ejji Ramen (wavy noodles in miso corn broth) and grabbing a special chocolate milk treat from Atwater’s. Nepenthe Brewing has the best French fries in the city! (We go early on Friday afternoons before it gets crowded.) We’ve also had great experiences with our kids in more refined dining settings, too. Woodberry Kitchen was awesome. They have a kids menu and edible play dough.

My kids are definitely eating off regular menus these days, but favorites include: The Food Market’s “fast food” menu, WellCrafted Pizza, Clark Burger, magical lemonade at Wight Tea, burritos at Clavel (and the beans which my son just devours with chips), whatever sandwich John Brown Butchery is serving up, the Hilo poke bowls at R. House, the wings from The Local Fry. And skewers, rice & pita from Souvlaki in Hampden.

My youngest loves the garlic fries from Silver Queen. And the other begs for the queso from Zen West.

My daughter absolutely loves the chicken buns from Fire & Rice.

My son loves the crab bisque and pretzels with beer cheese from Food Market, fish and chips from Johnny’s and Thames Street Oyster House.

My kids tried the Colossal Crab Cake Egg Rolls at Papi Cuisine in Fell’s Point this weekend and they were a huge hit.

Clavel l has always been a favorite. Mixtas, beans, chips.

The Food Market, pretzels and beer cheese! My daughter loves the salty top of the pretzels with the perfectly melty cheese. We always get 2 orders just for her.

We’ve been doing weekly takeout night since the pandemic started and my daughter’s most common request is for Golden West Cafe. She‘s all about pancakes for dinner.

The kids meals from Namaste. They have some lightly seasoned chicken skewers that are more than just basic chicken yet not too different/spicy. Plus naan with a variety of sauces to dip is always a hit.

Some of my son’s faves are BRD fried chicken sandwiches, Souvlaki’s Bifteki (meat patties) and any Caribbean pocket from the Curry Shack at the 32nd Street Farmers Market.

My 6-year old loves the Italian sub from DiPasquale’s.

At Chiyo we get avocado rolls and instead of wrapping in seaweed they wrap in soy paper for kiddos, which is easier to bite through! they also do plain udon noodles for us, and my kids love edamame.

My kids love to split scrambled eggs and fresh fruit at brunch at Petit Louis.

Mine love cream of crab soup from Frazier’s (I know, not an expected choice – but it’s comparatively affordable and really pretty good) and ground beef tacos or carne asada quesadillas from Holy Frijoles.

My kiddo loves the Shrimp Pita Wrap at Souvlaki and the staff there are so nice.

My kids always love Chiyo. Veggie tempura and yakatori for apps and then they try everything we get — it’s fostered their love of sushi for sure.

We’ve done a lot of pizza and a lot of Chinese (China House.) We’ve had great success with the fried edamame and cheesesteak from Johnny Rad’s (along with pared down pizza toppings.) Recently, we’ve introduced them to sushi from Katana and that’s the only thing they want to order now. We order tempura shrimp for the 7-year old and simpler rolls (we’ve built up to salmon/avocado from California rolls) for the 10-year old. But, inevitably, they eat some of whatever sashimi or nigiri we’ve ordered for ourselves under the guise of trying the different fish, since it changes every time. We think we’re going to introduce Ethiopian next.

Clark Burger cheeseburger and chocolate shakes are our daughter’s favorite!

Pita and Greek salad from Samos!

Have suggestions? Email me! amy@charmcitycook.com or message me on Instagram. 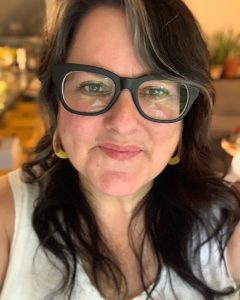