Linguine with Fresh Peas and Fiddleheads

By Amy Langrehr  •  8 years ago  •  Uncategorized, Recipes and Ingredients 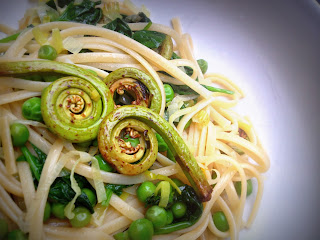 Ah…springtime at the farmers market. I’m so, so happy to see favorites like rhubarb, ramps, peas, fiddlehead ferns and more. I almost cried when I saw Mr. McCarthy, “the pea man” this week – he’s wonderful, almost zen-like. Before you know it, he’ll have those awesome beans, too. His asparagus and strawberries are so good right now, too! (Fact: He sells them for a dollar or two less than nearby stalls!)

Here is one of my favorite recipes using springtime vegetables. To me, the fiddleheads give it great taste, texture and uniqueness…and the peas lend nice sweetness. If you can’t make it to the market to get fiddleheads, just use peas and asparagus! I’m a big fan of use what you’ve got, hon. Feel free to use any greens you have on hand, too. I sometimes use dandelion greens, arugula, etc.