Comfort food. I’ve written about it before. I love what it does. It has a job.

Two years ago when my brother died after a mind blowing two week illness, my family needed comfort. After the funeral some of us gathered and I cooked. The night before, I had thought about what to make…and I decided that soup was the winner. And it had to be comforting soup, so I made Ina Garten’s Cheddar Corn Chowder. I’d made it many times before and it’s delicious, filling and most of all, comforting. Kids and adults alike, everyone loved it. We sat around that table and multiple servings were had by many, me included. My sister-in-law Karen even made us all laugh and I was so thankful for that. What a terrible time that was, but I honestly felt like the food helped a little.

Last month, my two best friends had major family medical traumas and needed some comfort. Again, I cooked. I didn’t know what else I could do. For one of the dinners, a friend suggested that I make chocolate pudding for dessert. To many people, homemade chocolate pudding was a pretty common thing to have with your family…not for me. My mom didn’t have a lot of time for cooking since she had six children to care for, in addition to my dad who suffered from Multiple Sclerosis. She always says that she didn’t really cook — she just fixed food. She tended to make things that didn’t take too much of her time since there was always so much to take care of on a daily basis. That said, I never felt like I missed out on anything. We ate well.

For my first attempt at homemade pudding, I used a Tyler Florence recipe...it seemed really simple and I had all of the ingredients on hand. Also, I think when you make something for the first time, it’s a good idea to go with a pretty basic recipe. I might make Smitten Kitchen‘s recipe next time – it looks really good and doesn’t seem very complicated – it just uses actual chocolate vs. cocoa powder.

Homemade chocolate pudding honestly is such a treat – it’s thick and chocolatey, but not too rich or heavy. A perfect, simple dessert. After my friends had plenty for dessert AND there was clearly enough for some leftover for my friend’s mom – now suddenly a widow – I doled out a little bowl of it for myself. It made me instantly happy. It was such a sad time, so having a few minutes of happiness was pretty sweet.

We even joked about the fact that we’d always considered opening the pudding packet and stirring it on the stove was “making” pudding. Turns out, we were so wrong. 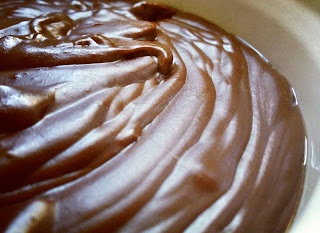