A new restaurant in my ‘hood that is not only a nice place to go for dinner, but also comfy (nice but not too fancy) and not overpriced – The Food Market. It opened less than two weeks ago and I’ve already been a couple of times. And I’m not the only one. You addicted ones, you know who you are…

The Food Market’s food has been described as “blue collar food with white collar execution” which, to me, sounds a little gimmicky, but it’s actually a good frame of reference. Let’s just say it’s good food, with interesting ingredients, presented creatively and at the same time, not fancy schmancy. This is Hampden and I love Hampden.

Approachable, fun dishes abound…and they are grouped in sections called little, small, big and in-between. I’d try something from each section, like fried chicken and biscuits with (kick-ass) black hot sauce, fluffed blue cheese and celery juice syrup; duck confit potato skins with mornay, cheddar and green peas; salt & pepper tuna with avocado tzatziki and marinated cucumber; shrimp with cajun cream, cheddar grits and andouille chip; lobster fingers and fries with honey mustard and drawn butter; scallops with roasted tomato risotto, spinach and cream chipped bacon; amish soft pretzels with beer cheese fondue or buffalo pickles with crumbled gorgonzola and hot sauce. And desserts? Holy dirt. The peach cobbler with Taharka vanilla ice cream? Serious biz. And the Heath Bar bread pudding? Yep. And next time, I’m gonna have the whipped cheesecake. The way our server swooned when she described it made me kinda wish I would have taken it to go. 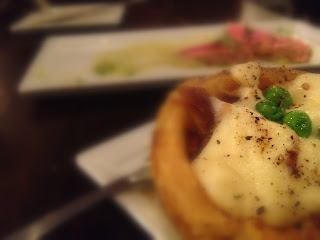 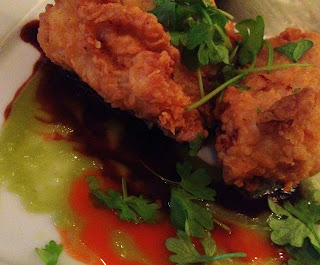 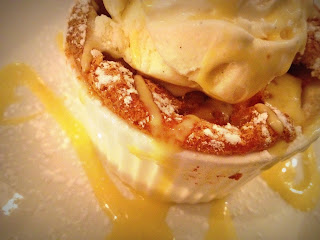 Unlike my other super duper Hampden fave, Corner BYOB (still dreaming of the pork loin I had about a month ago) they have a full bar, so they have some delicious cocktails with fun ingredients and names like the Hampden Hurricane, the Gin Na Say Pa and the Full of Grace. I’m guessing the Full of Grace is a nod to the John Waters film, Pecker, which was filmed at the Hampden Food Market when it was an actual store. (Am I right, guys?) 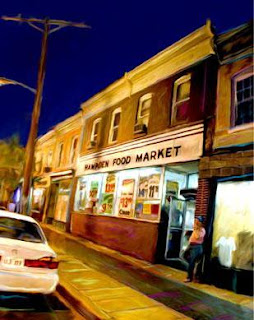 They also have a nice list of draft beers (Boulevard Brewing’s Tank 7 Farmhouse Ale), as well as bottled (Ommegang Hennepin – yum) and canned beers (Schlitz, seriously…) and a nice little wine list, too. (But…I do think the wine list could use a little tweaking.) There are also some non-boozy selections like Strawberry Basil Smash and a Virgin Mojito.

Bottom line, what I like best about The Food Market is that it’s not trying too hard, and to make things look effortless takes some real effort. Chef Chad Gauss and his partner Elan Kotz have a lot of experience in the restaurant biz (as do all of the folks who work for them) but they also know Baltimore. You cannot force things on people in Baltimore…we can smell it. So, The Food Market just sorta fits in. Comfy, but feels like a a treat night out. And, it’s right next to Zissimo’s. Good stuff.

And you know what else? These guys are smart. Free valet parking. They’re on Open Table. Brunch is served from 9-3 on Friday, Saturday and Sunday. The brunch menu also offers bloody marys and mimosas; silver dollar pancakes with lemon ricotta, rosemary butter and berries and creamed chipped beef on fried dough. (Yes, please.) They serve dinner seven nights a week and the kitchen is open til 1:00 a.m. Coming soon: Happy Hours and pop-up events. Follow ’em on Facebook so you don’t miss out!

With a start this good, I have a feeling it’s only gonna get better.