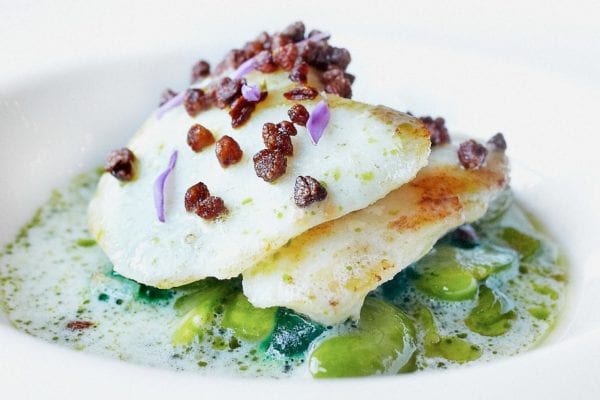 On a blustery, cold Saturday morning two weeks ago, I was lucky enough to meet up with Chef Steve Monnier at his new restaurant space in Hampden, Arômes. You may remember the location as the Nutty Pub on Chestnut Avenue, just south of The Charmery. I always cracked up at that place because a friend thought Nutty Pub was called “Just One More” because of the sign out front. “Hey, you wanna go to Just One More?” That’s funny, right? Sorta like when my friend was driving around South Baltimore looking for a restaurant called Open Table while I waited at The Wine Market. Okay it was like 2010, so I gave her a break.

As we chatted, it became immediately clear that Chef Monnier was born and raised in France. Every few sentences, I wondered…did he say sous vide? Lettuce? Salsify? After a little bit, I was able to follow along a little better. (I played it cool, even though I’m not really good at it.) What was also clear? He is a very easy, warm nice man, not a scary French chef that so many Americans might imagine. I immediately liked him.

Born in Reims, France (near Champagne), Chef Steve and his family had a great passion for cooking, so food was a big part of his upbringing. After two years of traditional study in college, Steve went on to do a two-year culinary apprenticeship where he finished first in the state. Hoping to keep learning from the best chefs, Steve landed a job in the South of France at the Martinez Hotel (two Michelin stars), where he learned all about Mediterranean cooking from Chef Christian Willer. After a year, Steve wanted to go further with his career and took on the role of Commis at Carré des Feuillants (again, 2 Michelin stars) with Alain Dutournier. Chef Dutournier taught him all about Basque country cuisine heavily influenced by Asian ingredients. Carré des Feuillants is also where Steve began to use techniques like sous vide and slow cooking methods.

Continuing on his quest to learn and experience as much as possible, Chef Steve went on to work for Philippe Broun at Le Laurent for two years and then with Michel del Burgo at the Taillevent for two years, which are 2 and 3 star Michelin restaurants respectively. Says Steve, “Michel del Burgo truly opened my eyes to a different style of cooking.”

Then in 2002, Chef Steve moved to California taking the role of sous chef at La Cachette in Los Angeles and later taking on a position at L’orangerie with Christophe Bellanca. He then met his wife Florence in Los Angeles (she is also French but was raised in the US) and then they moved to the east coast – for many reasons. First, flying to Europe from cities on the east coast is easier. Also, when he looked at New York, Philadelphia, Washington, DC and Baltimore, our fair city stood out for many reasons: affordability in real estate, rich soil (terroir, Chef said…), the Chesapeake Bay, the ability to forage for ingredients, as well as Baltimore’s growing food scene. He looked at neighborhoods, spaces and began to meet local chefs and restauranteurs and focused in on Hampden. After acquiring the space on Chestnut Avenue last summer, he got to work and as you can imagine, there were hurdles and delays, but he’s almost ready to open now. If all goes well, early February is the goal. The Monniers moved to Baltimore in February 2014 and now live in Catonsville with their young son, Hugo.

We talked about the menu, which will be a set pre-fixe, New American and French with a particular focus on vegetables, which is not to say it will be vegetarian. The menu he shared with me had a hanger steak on it…so, fear not carnivores. Since the menu will depend on what is available locally, Chef is meeting with local farmers and food producers to see what he will be able to offer when they open next month. Once we get closer to spring, he will begin to forage for ingredients and grow some ingredients himself like herbs, and wonderful spices like the halva a nutty spice from Israel, etc. Also, even though it will be a set menu, he will certainly be glad to work with guests with dietary restrictions and allergies in order to give them an equally delicious experience. Initially, it will be BYOB, which to me is, well, YES! However, Chef and his business partner Gilles Mascarell of Salt, are hoping to eventually offer a small number of wines – perhaps 6 white, 6 red, to be paired with the menu. Gilles will run the front of house, while Chef Steve will run the kitchen. The space is tiny. Ten tables, plus one communal table in the front. My friend said, “It’s going to be Bottega-esque” and I’d agree, even though the cuisine will be very different, of course. However, the warm, intimate vibe is definitely something Chef is striving to have. And, with the warmth and genuineness I experienced during my first meeting with him, I’d say he’s well on his way. He mentioned to me how much Hampden feels like a real neighborhood and so many residents and business owners have been particularly helpful…like his neighbor down the block, Dave Sherman of Café Cito. That’s one thing I’ve always loved about living in Hampden – it’s a little village. I can call on any number of local business owners for referrals, information, guidance…even helping me with ordering baking ingredients and heavy lifting! #ilovemyhood

Chef Steve is that he is constantly looking to learn new techniques and gain new inspirations. He recently interned with Chef René Redzepi at Noma in Demark, which has been nominated as the number one restaurant in the world for the three years in a row. Chef Redzepi is serious business. Very.

I can’t wait. Hampden’s getting fancy pants…but it’s still has a whole lot of character, which is why I love it so much.

Take Comfort, and Make Yourself Some Risotto
Next Post:The Battle of the Sommeliers: Who Will Prevail?