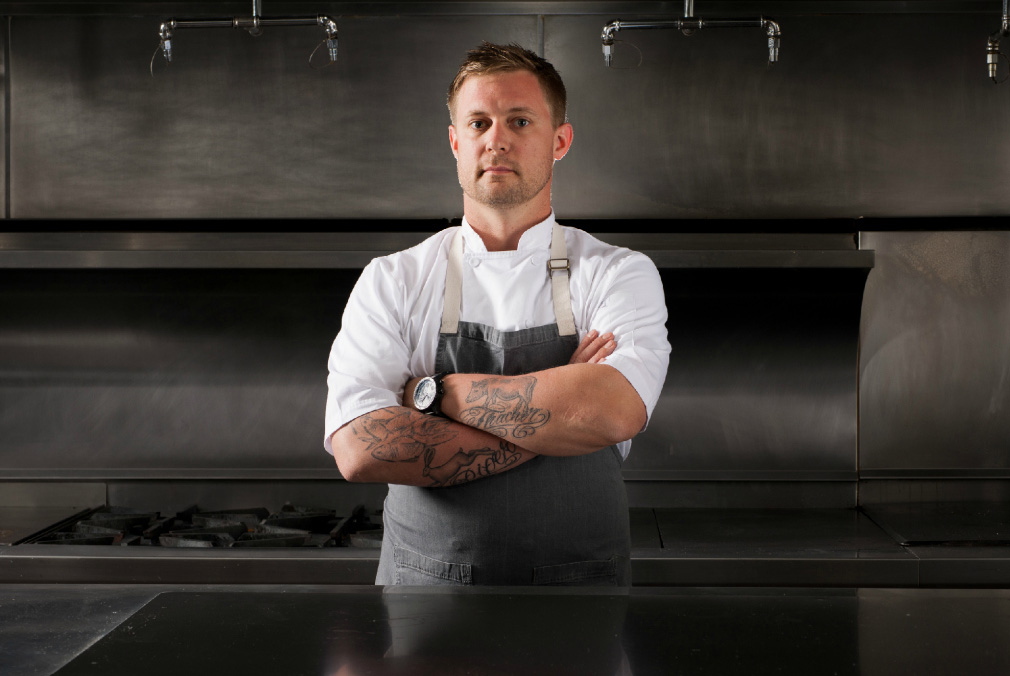 Reality shows like Top Chef, Top Chef Masters, Chopped, Iron Chef and others are hugely popular. Even being on them – not even winning – can be a huge career move. I can name 20 “cheftestants” from past seasons of Top Chef. I have a bit of crush on Tom Colicchio and I think Hugh Acheson should have his own show. Jenn Louis, too, she’s amazing. And I’d love to meet Jonathan Waxman. Okay, I’ll stop now…

With the increasingly popularity of food and cooking, chefs are becoming rock stars in their own right. I’ve definitely met a few who believed their own hype, but for the most part they are just really hard-working, creative folks. I randomly met one super famous chef – Emeril Lagasse – in NYC earlier this year and he could not have been nicer. We chatted, he asked me about Baltimore and my business, and he told me about a new food show he was creating with Martha Stewart. He was so, so normal. That’s nice to know.

I met Bryan Voltaggio for the first time just this year. My friend did his PR and invited me up to Volt for dinner. And Bryan happened to be there that night, and the food was exquisite, the service, flawless. Our servers moved stealthily – each course swooped in when you weren’t even looking. I had never experienced service like that (I live in Hampden and love dive bars) and I liked it. I could get used to it – very much so. Bryan and his Chef de Cuisine Graeme Ritchie visited with us for a little while and then we headed to Family Meal, just to see it, since I had not been yet. Bryan was not far behind us, he rolled in to check on things there and we caught the last inning of the Os game at the bar and ordered shakes to go. I can’t wait to go back to Volt. I loved it. But for me to spend that kind of money, I need to save up a little bit, but I will… After that dinner in Frederick, it seemed like Bryan was everywhere…at the Emporiyum in Fells Point and his own pop-up dinner at Artifact with Opie Crooks and Spike Gjerde of Woodberry Kitchen in April, at Aggio’s opening week in June, at the cystic fibrosis Passion for Food & Wine and Baltimore Seafood Festival in September. All the while, meeting and greeting, posing for photos, doing what celebrity chefs must do. And he does all of it with ease and a good attitude. Every time I run into him, he’s just the same and always stops to say hello. Steady Eddy. Asparagus with fava and pea ragu at Aggiofact.

As we sit down for our interview at Aggio, Bryan is juggling a million things. (Family Meal opens in Baltimore in a matter of weeks…) He rolls in, cell phone buzzing with alerts. He promptly shuts it off, apologizes and sits down. He smiles, shakes my hand and asks how I’ve been. The restaurant is buzzing, it’s the the beginning of Friday night service.

Was food a big part of your upbringing? Did you cook when you were a kid?
BV: Always. The first thing I really remember cooking was scrambled eggs, and maybe grilled cheese. We used to have pancake eating contests with our neighbors – that was a lot of fun. Where we lived in Frederick, we could have a big garden and we lived near farms, so we learned early about food. As a kid, I ate everything. My brother Michael hated green vegetables.

Lots of kids get to choose the meal on their birthday…anything they want (to a point, I suppose…) What would be your ‘birthday meal’ now?  What did you ask for when you were a kid?
BV: Oh, yeah. Definitely…but when I was a kid? (Grabs phone…types…) Let’s get back to that one later. I can’t remember. (Pauses. Smiles. Phone lights up.) Oh, okay, yeah. My mom texted me back: Fried chicken, baked mac ‘n cheese and applesauce. So, yeah, my birthday meal was (his restaurant) Family Meal. That’s funny. And for my birthday meal now? Someone else cooking for sure and it’s whatever I want in that moment. My tastes change a lot. I don’t really have a favorite restaurant right now – I just don’t have enough free time to go out that much. I will, though. One day. I can’t wait to explore Baltimore more.

What food trend can you absolutely not stand?
BV: I guess just that food has trends. I honestly believe that you can just keep creating new things and building on existing things…you know? We can always just keep changing and evolving by coming up with new ideas. One thing I truly believe is that farm-to-table is not a trend. It’s a reset to what we were supposed to be doing all along.

How do you balance home and work? You have young kids – that can’t be easy. I guess days off are big.
BV: Well, balance is hard. Really challenging, especially as new restaurants open. Like, the Baltimore location of Family Meal is next…but that’s near Aggio, so that helps. Really my kids need me as much as my restaurants do. My wife needs me even more. The kids are 7, 3 and 1 – so, time together is quality time. Period.

Top Chef is such a popular show…what’s it like having so many people know who you are?
BV: It’s okay. When I was on Top Chef, I was just me.  Obviously, not acting. (Laughs…oh, I love his laugh!)

Any plans to collaborate with your brother? How often do you guys see each other?
BV: Yes. We did a holiday cooking series with Cooking Channel. (Pulls up a video on his phone of Bryan and Michael cooking Thanksgiving dinner…) We filmed it earlier this year. That was fun, us working together. Duff Goldman was part of one of the episodes, too. Really fun. Hopefully we’ll do more.

When I tell people about you, I often find myself using the word “normal.” How do you stay grounded?
BV: Well, it’s starts from the fact that I stayed where I grew up. People who know me around here just know me as Bryan. Being near family, being with my wife since high school, being in Frederick…all of it together just keeps me grounded. I still do some television stuff, but that stuff doesn’t change me as a person. I’m still just a cook.

What chefs do you admire?
BV: Thomas Keller is a pretty obvious one. His pursuit of the perfect kitchen machine. He’s been kind of a mentor from afar. I admire him a lot. Charlie Palmer has been a great influence on me. And, Gerry Hayden of Aureole – he gave me a shot as a chef.

What do you like about Baltimore?
BV: We came to Baltimore a lot as kids from Bowie and Frederick. Orioles games were always fun. Baltimore has a lot going for it – being on the Chesapeake, there’s so much culture here and it’s really an approachable city. I lived and worked in New York City for seven years and I always knew I wanted to come back home and cook.

What do you love about food?
BV: I love having a creative outlet. You know, beyond just sustenance. I love what I can do with food.

What are some of your favorite restaurants in the City? And, where in Baltimore would you take your wife for a date night? No kids…
BV: This is hard. I need to get out more…ideally? Maybe Charleston, Wit & Wisdom, Woodberry Kitchen, Cinghiale. There are more for sure…and it’s nice to be here now. Nice to actually be able to spend time in the city as an adult. I can’t wait to get out more. Baltimore is such a great city.