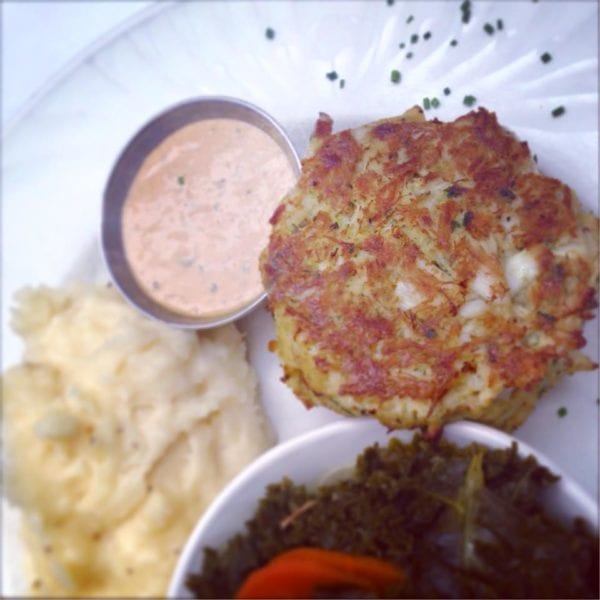 I really thought I knew John Shields. And maybe you think you know him, too. Baltimore. Chesapeake Bay. Crab Cakes. But there is so much more. I honestly could have listened to his stories all day long. We only had an hour.

John is a Baltimore native. In his youngest years, he and his family lived at 25th & Greenmount. His German grandmother, Gertie – for whom his restaurant is named – taught him to cook at an early age. Basics…and of course, everything from scratch. He was her prep cook and he loved it. When he was five, the family moved up to Parkville and he attended Immaculate Heart and graduated from Parkville High School.

His road to becoming a chef actually began in Provincetown, Mass. Totally bored at an office job, John decided to move there in the early 1970s with the idea of becoming a rock star. He loved singing, performing and the community and camaraderie that went along with it. Being that Provincetown is primarily a resort town, there was not much work in the dead of winter.

One day a friend who was a cook broke his ankle and called on John to fill in for him at work – and there he went. The chef at the restaurant asked him to peel a huge bag of garlic. John happily agreed, “Sure, I can do that.” Growing up in a German household, he had actually not worked with garlic very much…kraut, he could do with his eyes closed. So, he peels loads and loads of garlic for the chef, cutting pretty much every one of his fingers along the way and ended up in about 8 band-aids. He was a mess, but so happy he did it. Then, the chef asked if he knew how to make pies. YES! John replied, “Yes, I can make pies!” His grandmother was a wonderful baker and he had helped her bake so many pie over the years. Chef says, “I need you to make 36 pies.” Um, wow. Okay. John made all 36 pies and the restaurant was set for dessert. But, when he finished he quickly realized all of the band-aids were gone from his fingers. Oh, no. (As he is telling me this story in a buzzing dining room at Gertrude’s, I am laughing so hard that no sound is coming out…)

After the band-aid debacle, John honed his skills there in Provincetown for several years, then eventually headed back south to the Waldorf-Astoria Hotel in NYC and then home to Baltimore. He worked in various kitchens including at Uncle Charlie’s Bistro with legendary Baltimore chocolatier Albert Kirchmayr, who at the time was a pastry chef there. Then, California called him west…

In 1978, he went to Northern California on vacation – and, stayed. He quickly bonded with a group of creative people working in food, none of whom had attended culinary school. They worked in an area of Berkeley referred to as the Gourmet Ghetto – people like Jeremiah Tower and Alice Waters, Jonathan Waxman and Sue Conley and Peg Smith of Cowgirl Creamery, to name just a few. This was the birth of California Cuisine…and here is Baltimore boy, John Shields. (This was the part where I was like, I had no idea…) He cooked at A’la Carte, where they changed the menu every day, something unheard of at the time. He was heavily influenced by this creative, super locally-focused food scene and he met the most interesting people. For example, he bought quail from a local farmer who also happened to be an opera singer. He organized dinners pairing his food with Napa wines from wineries run by people who would become friends of his – and it all felt very natural to him. Being creative and collaborative – along with thinking on your feet – was a big part of it. He could just do it. And that felt good.

Later he ran and owned Gertie’s Chesapeake Bay Cafe from 1983-1992, then also Saul’s Deli, which was regarded as Northern California’s premier Jewish deli. He ran Saul’s until 1997 when he moved back to Baltimore to open Gertrude’s at the BMA. And, you probably know the rest. He is a tireless volunteer for the local Baltimore community, raising money for organizations like Moveable Feast. He is such a Baltimore guy. So easy going and personable. Kind. (That’s the part I already knew…the giving soul and kind heart.)

When we sat down for the interview, he fed me lunch. (Thank you, John.) I had my favorite crab cake in Baltimore. Many people talk about the big crab cakes like G&M, Koko’s and they’re fine. But the Gertie’s Crab Cake at Gertrude’s has always been the one I love the most. It’s far from the biggest, butto me, it’s the best. Real Maryland crab meat, it falls apart and it has so much flavor! Was food a big part of your upbringing? Did you cook when you were a kid?
JS: Yes, definitely. My grandmother, Gertie, was a great cook. Back then, of course she made everything from scratch, she was a very hands-on cook. She cooked at St. Anne’s Church, serving what at the time was called a “businessman’s lunch.” So, I’d help her prep – husking corn, stringing beans. I loved it. What I remember most about dinner as a kid is that we ate together every night as a family and we all helped with dinner. There were bowls and bowls (tons of vegetables) and we passed them around and talked about our day. We ate pretty healthy food. For breakfast, it was pretty steadily eggs, then lunch at school was a hot meal like chicken and potatoes. And I always had an apple for my after school snack. Always. People say to me that they always remember me as a kid eating an apple. That’s great.

Lots of kids get to choose their birthday meal..anything they want (to a point, I suppose.) What would be your birthday meal now and what was it as a kid?
JS: When I was little, I guess it went back and forth between roast pork, sauerkraut and mashed potatoes to fried chicken, applesauce and mashed potatoes. Now? Sounds weird since I see crab cakes everyday of my life, but I’d probably like a crab cake, applesauce and a baked potato.

What do you do on your days off? How do you balance?
JS: Well, balance is hard. But I do my best. On my day off, I meet a friend at Towson Hot Bagels. It’s our coffee clatch, once a week. We catch up and it’s always so much fun. And then dinner on my day off is usually at home – usually a braise, stew, something slow. At home we eat a primarily plant-based diet, but we do eat meat from time to time.

What food trend can you really not stand?
JS: Just about all of them. (Laughs..) But really, if it has to be a trend, it already annoys me. I’m into real food. Cooking reality shows are not my favorite. So many of them degrade the food in some way. That said, I really enjoyed Jamie Oliver’s Food Revolution – it was entertaining but also focused on public health, which is so important.

I see you at Waverly Market every Saturday morning, bright and early. You know all of the farmers. Farm-to-table is a phrase that so many chefs are tired of these days. What do you think of it?
JS: Farm-to-table has been my mission for my entire career. We need to rebuild our economy and use the resources we have. I long for the day when we don’t have to call it farm-to-table anymore.

Do you have any time to watch any food tv? If so, are there any celebrity chefs you really enjoy?
JS: The classics – teaching shows. You know, people like Jacques and Julia. They teach and cook with love. It’s easy to watch and see why they do what they do. It’s just real. I have a funny story for you. In 2000, the big IACP (International Association of Culinary Professionals) conference was in Baltimore and it coincided with Julia Child’s birthday. There was a fundraiser for her foundation at Gertrude’s and Jacques Pepin attended. At a certain point, I was looking for my mother who had attended the event with me. She really had no idea who any of these ‘famous’ people were – and that was great in and of itself. So, I walk out into the lobby of the BMA trying to find her to leave and there she is, sitting on a bench talking and laughing with none other than Jacques Pepin. Can you imagine? And she says to me, “I met this very nice man – and he spoke French!” Jacques is a wonderful man.

What do you love about Baltimore?
JS: Its quirkiness. And the people, of course. There are so many different neighborhoods and a real sense of community. My partner, John, is from Chicago and what strikes him about it is that the people here are just so nice and it’s easy to live here. Sure, we have our share of problems, but I love it and that’s why I stay.

What do you love about food?
JS: Its ability to bring people together. There’s a sense of conviviality and community. As a kid, we ate out very rarely. We didn’t have any money and the ability cook made life better for us. As I said, we all had jobs in getting dinner together. For my family, eating together every day gave us a great sense of responsibility. It was a time to check in and hear how everyone was doing. That’s so important.

What are some of your favorite restaurants in Baltimore?
JS: Well, as many people who work in restaurants understand, we don’t really get to go out too much. When I travel tends to be the time I get to go out to dinner. But locally, we really love Cafe Gia, Woodberry Kitchen and Birroteca, which is one of our favorite places to take out-of-towners. Oh and wow, The Helmand. To me, that was the first ethnic restaurant in town that raised the bar. It’s consistently so good and it feels like a night out without being expensive. The food is so good there. And, I have to mention the place that we and our friends call, “The Club.” We are not country club people, so we go to Pappas’ in Parkville with a mixed bag of old friends and new – and we call it the Parkville Country Club, the PCC.

Okay, obligatory. When you cook at home, what do you like to make? Do you have a “go to” meal at home?
JS: Well, we don’t cook at home that much. One big treat is getting Chipotle and eating it in the man cave while we watch Downton Abbey! (I love that answer…the truth!)

A warm and creamy soup sure to cure your winter blues
Next Post: Zensations By Jen Has A Cure For What Ails You