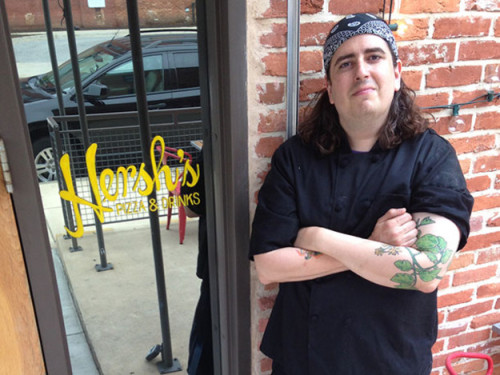 Josh Hershkovitz of Hersh’s Pizza is a man of many talents. A Baltimore native and graduate of McDonogh School and the University of Chicago, he studied both sculpture and philosophy in college. He also has an MBA. And the cooking. He certainly has that down. Aren’t you glad he chose cooking?

After college, Josh briefly moved to Miami, then returned to Baltimore and worked in furniture at McLain Weisand and later, with Eric Rink at Artisan Interiors in Woodberry. He always liked working with his hands and being creative, so this sort of work was perfect and he eventually opened his own furniture and cabinet design company in 2002. Then, he saw an ad in the City Paper for a cook at Charleston Restaurant. Since he could pretty much talk himself into any situation, when Chef Wolf called, Josh sold himself and she hired him. “That first night in the kitchen, I got my ass kicked. But I was using all of my senses. I loved it.”

After Charleston, Josh worked for the Foreman Wolf group at Petit Louis for two more years. All the while, he also worked at his father’s grocery store, The Markets at Highlandtown. He usually started his day there at 6:00am, then headed to Petit Louis at lunchtime, cooking through dinner. Then around 2006, he decided to leave the kitchen and get an MBA, which he did at night until 2009 and continued to work for his father. He considered culinary school, but thought he needed to learn the business side more. After business school, he and his sister Stephanie – at the time, an attorney working in New York City – decided to open a place in Baltimore. Then, Hersh’s was born in 2011.

Was food a big part of your upbringing? Did you cook when you were a kid?

JH: Well, my mom is a great cook, so I didn’t really cook a whole lot as a kid. My grandparents were old world, Eastern European. Everything was made from scratch – they made challah, they ground their own meat, etc. Someone was always cooking and holidays, of course, revolved around eating. As a kid, I was a really picky eater. Now, as a parent, I try to give my kids real food. I want my kids to be excited about food.

Lots of kids get to choose the meal on their birthday…anything they want (to a point, I suppose). What would be your birthday meal now? What did you ask for as a kid?

JH: I always loved veal scallopini or grilled lamb chops. Or I asked to go to Chili’s – that was especially fun as a kid. Also, for my parents anniversary, we’d go to Sabatino’s every year. Now, what I really like to do is have a party for friends and family and I cook. I like to make things like brisket – you know, really good food. Or maybe my wife Lena will take me out. But really, on my birthday, I’d rather be cooking. I wish I had more time to cook for my friends and family.

How did you choose your location? Is it challenging being just south of the city?

JH: Man, we looked at so many locations. We considered building it out and had to figure out what we wanted and what we could handle. Riverside is a great neighborhood and we definitely wanted to be a neighborhood place, a good place for families, too. Our space was most recently, Rub, a barbecue place. We really had to “de-Texasfy” the place. I actually built the bar myself. Over the last few years, we have built a great clientele in the neighborhood and each year it gets better and better. Kevin Plank’s new spirits company is going to be based in Port Covington, so things nearby like that are exciting, too. Lots of great things are happening.

What food trends can you absolutely not stand?

JH: Well, phrases like ingredient-focused and chef-driven mean nothing to me. And the whole celebrity chef thing is a bit overdone, it tends to make things about the chef and not the food. We are nostalgia-driven, really. Longing for a time and place. We tend to do things a bit more authentically. We do research. It’s really hard to find real food these days – you know, like really great pasta, cheese, salumi, etc. Cooking is so animal. Sensory. At Hersh’s we make everything in house. The way it should be done.

You have two young kids – the hours can’t be easy. I guess days off are big. How do you balance work and home?

JH: Not well enough. There is never enough time with my family. Sundays are definitely our day off together and I try to be out of the kitchen one night a week. We’re closed on Tuesdays and I have my son (Otto, 4 months) with me all day that day. My wife is my hero. When I have both kids, I honestly don’t know how she does it and stays so cool.

Do you have any time to watch any food tv? If so, are there any chefs you really enjoy?

JH: Yeah, I like to watch Top Chef sometimes, when I can catch it. I like seeing what other chefs are doing. The best food show out there is “Mind of a Chef” on PBS. I mean, getting to watch someone like April Bloomfield work, that’s cool. I love watching people work with their hands. I guess it comes from being a sculptor.

What do you love about Baltimore?

JH: I like the neighborhoods. Like, Hampden for example. It reminds me of artist neighborhoods in New York City – but it has stayed quirky. I love the city. There are so many people here making great things. We have a big DIY thing here. We roll up our sleeves and get things done. We’re an underdog city, I think people here are motivated to change. As much as I do like bigger places, I like the smaller, local thing here better.

What do you love about food?

JH: It brings people together and engages all of our senses. Whether it’s a special occasion or a normal meal, it’s equally good. It’s about people interacting and it forces you to slow down and be together and interact.

What are some of your favorite restaurants? And where in Baltimore would you take Lena for a date night?

JH: Almost every time we go somewhere nice, we wish we’d just gone to Charleston. I know that might sound like a bit much, but it’s not. Foreman Wolf really knows what they’re doing. Petit Louis, too. I mean, the French onion soup and a cheese course. That’s just so good. We also really love Korean BBQ places. Shin Chon in Ellicott City is fantastic. Be One on Maryland Avenue has the best seafood pancake in town. Also, a trip to DC to go to Rasika for Indian food is always great, too. We really miss PABU – that was one of our big favorites, our usual date night spot. (Sad face from me…)

Okay, obligatory. When you cook at home, what do you like to make? Do you have a favorite ‘go to’ meal at home?

JH: I tend to try things are home that I might not do at the restaurant. We also cook lots of Asian food. We like to make things like bahn mi sandwiches and at the same time, old family recipes like my grandmother’s potato latkes. My daughter Lila loves pasta, and I try not to give her boxed pasta when I can. I love doing brisket on the smoker and also making things like meatballs and sausage. Also, Mexican food is a favorite in our house, too, and I like Rick Bayliss’ Authentic Mexican cookbook. So many cuisines are very simple and really should be prepared simply, you know?

Sparkling Grapefruit Sangria To Toast The End Of Winter
Next Post:Spring Has Sprung At Area Farmers Markets