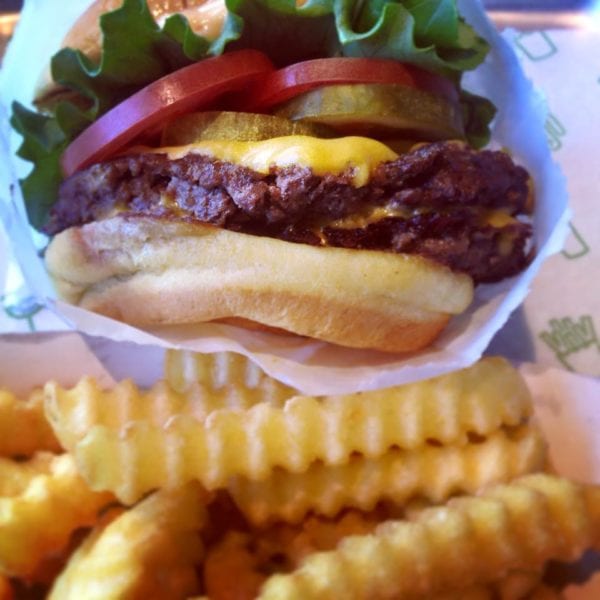 Shake Shack restaurateur Danny Meyer‘s modern day “roadside” burger stand known for its 100% all-natural, ground daily, antibiotic-free Angus beef burgers (no hormones added ever), griddled-crisp flat-top dogs, fresh-made frozen custard, crinkle cut fries, and more. Shake Shack has earned a cult-like following around the world. It’s fun, it’s delicious and it’s focused on creating each location as a warm, inviting gathering space. From the people to the food, they want you to be feel comfortable and at home at Shake Shack.

“We’re thrilled to join the dynamic city of Baltimore, and we couldn’t ask for a better home than the heart of the Inner Harbor,” said Shake Shack CEO Randy Garutti. “We’ll be working hard to build the Baltimore Shack as a true community gathering spot for locals and visitors alike to enjoy a ShackBurger, crinkle fries, frozen custard and a local craft beer in downtown Baltimore.” On my recent visit for the Friends and Family preview, I noticed that they were serving Heavy Seas and Flying Dog, among other local beers. Excellent. (Thumbs up, guys! Now, just add a Union Craft Brewing beer and I’m even happier.)

Look at this deliciousness. Just look. At the ribbon cutting and opening with Mayor Stephanie Rawlings-Blake on Monday morning, I asked Garutti, “So, why Baltimore?” And, he told told me, “We’ve been thinking about a Baltimore location for a while now, really. Then, once we saw this space on Pratt Street, it seemed like the perfect time. I see our customers as the lunchtime business crowd, folks on their way to and from Orioles and Ravens games, tourists visiting Baltimore and more.” Um, and food nerds like me.

Did you know that Shake Shack started as a hot dog cart? Seriously, for three years it was a very popular little spot for New Yorkers in the know. Then, in 2004 Danny Meyer decided it was time to go brick and mortar – in Madison Square Park, which at the time was a little run down and Meyer wanted to do something about it. Enter, Shake Shack. That was 2004. Now there are Shacks all over the world – even in Dubai, Istanbul and Kuwait.

As part of its mission to Stand For Something Good, the Baltimore Shack is partnering with Moveable Feast, which provides nutritious meals at no cost to those in need. Five percent of sales from the Salty Balty concrete will be donated to Moveable Feast, and Shake Shack team members will volunteer at events run by the charitable organization. So, get the Salty Balty – Moveable Feast does such great work.

In keeping with Shake Shack’s commitment to green architecture and eco-friendly construction, the interior walls of the Shack are clad in reclaimed antique barn wood siding. Like all Shacks, this location features energy-efficient kitchen equipment and lighting. Booths are made from lumber certified by the Forest Stewardship Council, and tabletops are made from reclaimed bowling alley lanes hand-crafted in Brooklyn, NY. That’s pretty cool.

I always loved visiting the Shack in NYC – and now I can visit in my own city. Happy, happy girl. The Battle of the Sommeliers: Who Will Prevail?
Next Post: A warm and creamy soup sure to cure your winter blues