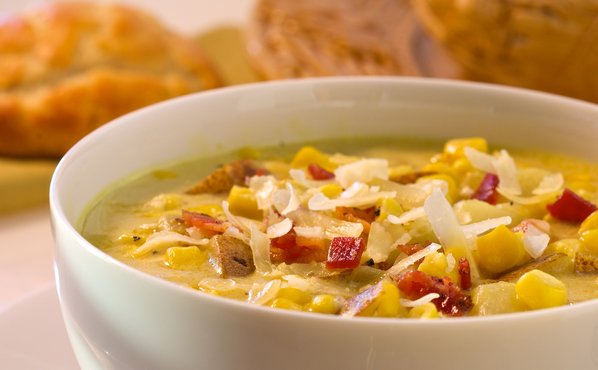 Courtesy of charmcitycook – Soup is the most comforting, satisfying thing to me – especially in winter. My fave in the whole world is Ina Garten’s Cheddar Corn Chowder. Cheese, corn, onions, potatoes…um, bacon…what’s not to love? Ina is not known for light cooking, so I use a little regular milk in place of the heavy cream and it’s plenty rich. I’ve made this soup about ten times over the last few years. Obsessed? Yep. Make it, you will not be disappointed.
Here are two more great winter soups, both from my favorite food blog, The Kitchn.

First up, Baked potato soup with bacon, onion and cheddar. No, not the healthiest, of course, but quite tasty.

Recipe note: it calls for two cups of bacon bits. I love me some bacon and the thought of buying bacon bits made me think, um, no. So, instead, I cooked an entire package of sliced bacon and made my own – but I didn’t end up with enough. I’d probably use bacon bits next time – Oscar Mayer makes some that seem less scary to me.

This soup is, of course, very filling. Pace yourself. 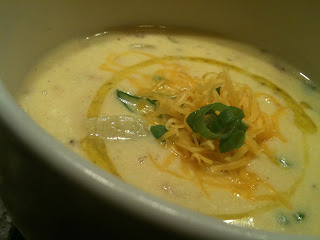 Here is a healthier soup option: Sweet potato soup with miso and ginger. My local grocery store didn’t have the miso paste, so I went to Asia Food on York Road [thanks, Lauren] and while there, I also picked up some buckwheat noodles for a future cooking adventure. This miso paste has such bright flavor and the ginger gives the soup a nice little kick. This would be great with a salad and good crusty bread for dippage.
Recipe note: I’d use a smidge less ginger than what the recipe suggests.
Highly recommend this soup – I’ll definitely make it again! And I’ve gotta give a shout out to my awesome Cuisinart immersion blender – they come in fabulous colors, too! No more pureeing soups in batches in the food processor. It makes life so much easier! 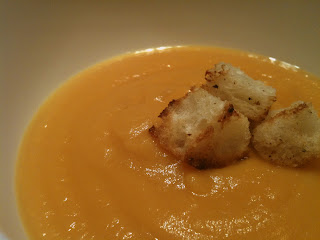