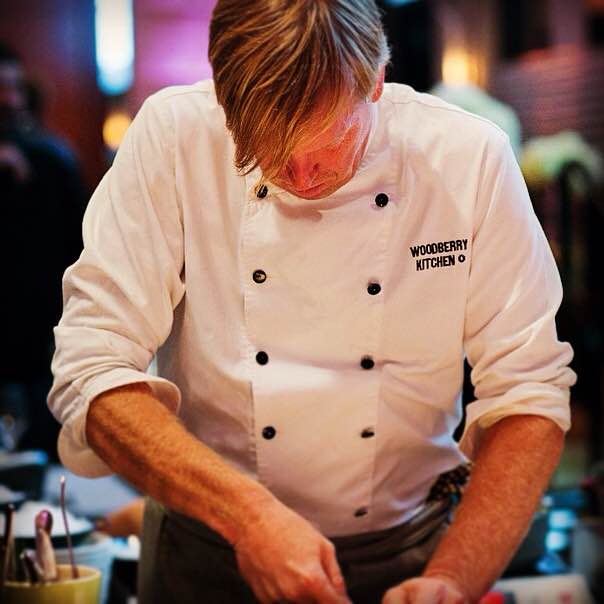 I guess I’ve known Spike Gjerde about eight years now, since a little before the time of Woodberry Kitchen‘s opening in 2007. In my full-time job as alumni director at a local independent school, I was looking for a place to have an alumni gig. My friend Katie Hearn was working for Struever Brothers at the time and was project coordinator for this super cool new redevelopment in Woodberry called Clipper Mill. She said, “You know Spike…Amy, you know…Spike…of Spike & Charlie’s!” Of course I had heard of Spike and I had heard a little bit about his new place, which was about to open. It had, in fact, been delayed in opening for some time. But as I quickly learned as I got to know Spike and Amy Gjerde, they wanted things done a certain way  – and I respect that. And the smartest thing they could have ever done? While they were getting Woodberry open, they opened Artifact Coffee inside and served some of the best coffee Baltimore had ever seen. They were open in the mornings in the big front room inside Woodberry Kitchen and then later offered sandwiches and bites for lunch and I spent many a Saturday afternoon having lunch and insane amounts of caffeine.

So, Spike and I make a date to talk about this party in his yet unopened restaurant and meet up next door at Gutierrez Studios. There’s Spike, tall, handsome, mid-40s, friendly and so excited to show me the new place. He was just as I had remembered from seeing him at his various restaurants: Spike & Charlie’s in Mt. Vernon (my first cool grown up dinner out), jr in Bolton Hill (the best mac ‘n cheese), Atlantic in Canton (raw oysters and sushi early on in Bmore), Vespa in Federal Hill (had a horrible date there…but also very delicious pasta), Joy America Cafe at AVAM, Woodberry Kitchen (cocktails and the CMP, says the girl who doesn’t like dessert), Artifact Coffee (the honey macchiato…you have to), Shoo-Fly (disco fries and slushies) and Parts & Labor (steak and roasted potatoes from the  hearth, please and thank you.) So, I knew him…but I really only knew his food. Which is a great place to start, no?

The first thing I learned about Spike when we met was that he loves coffee. This. This is where we bond. He leads me through the studio to a back room and a huge, gorgeous coffee machine and he makes me my first ever macchiato. We worked out the details of the party – which was a huge success – in the space that would become one of Baltimore’s most sought after reservations. And, I was high for like four hours. I liked this guy.

Over the years, we’d run into each other around the city and I got to know his lovely wife Amy, too. My late friend Nelson Carey of Grand Cru was initially a partner in Woodberry, too, but later decided to focus on his own business. Boy, I miss Nelson. As I began to write more about food in Baltimore in the last few years, I’ve become more and more impressed with Spike’s focus and work ethic. He is intense, but when you’re doing something as close to your heart as food is to Spike, intensity is a great thing. Also, his latest restaurant, Parts & Labor, is my current love.

Was food a big part of your upbringing? Did you cook when you were a kid?
SG: Not really. My dad has always loved wine and well, soup on the stove is definitely a good memory for me – that was a good Sunday. But, not we weren’t a big food house. So, I don’t have any great stories about my Sicilian grandmother… (He smiles.) When I was in college at Middlebury, I got into cooking. I studied Chinese language and philosophy…but then I also worked (I guess now you’d call it staging…) at a bakery. I’d ride my bike there at midnight and bake all night. Sometimes I was able to ‘bribe’ my professors with baked goods. (He laughs.) That was fun.

You’re a dad…and a chef. Are your kids really into food? What do they like to eat?
SG: Our kids aren’t super adventurous eaters. That said, they love the experience of going out to eat. Like, recently my son (15) and I went down to DC to Rogue 24 – and did their tasting menu. It’s 24 little courses. RJ (Chef RJ Cooper) sent everything out and I think my son tried most of it. That was a lot of fun.

What food trend are you kind of over?
SG: Quick answer? Cupcakes. I’ve just never understood the draw there, but my daughter loves them. But as far as overall food goes, I wish more people would stay on message. It’s really important for us to figure out the best way to feed ourselves and I’d love to see a more robust conversation about it. There’s just not enough thought about food and the environment. I could go on. But then, you know how I feel about this stuff.

How do you balance home and work? With a family that can’t be easy. I guess days off are big.
SG: That’s really hard right now. There aren’t a whole lot of real days off. But it definitely goes in waves. You know, like back in the Spike & Charlie and Atlantic days, it was just different. But  I know that quieter times will come back. Right now, I’m putting everything into these four restaurants. Blue sky is coming. And, cooking helps a lot. I’m on the oven about twice a week at Woodberry and I cook “Bowl & a Beer” just about every Wednesday night at Artifact.

What chefs do you admire? Any you’d like to work with?
SG: Well, the first chef I really encountered here in Baltimore was Joseph Poupon (of Patisserie Poupon). He’s one of the hardest working chefs I know and he’s always been incredibly generous and embodies he qualities I strive to have. Also, Erik Bruner-Yang of Toki Underground. He’s going to do interesting things and he’s really serious about what he’s doing. In a really good way. I also have to say that Opie Crooks (Woodberry’s Chef de Cuisine) is an amazing person. The level of experience he has, and he’s completely himself and so passionate. I really admire Opie. As far as chefs like to work with? I’d have to say Albert Adria or maybe Amanda Cohen of Dirt Candy. Also, Cook It Raw is something I’m interested in. It’s a gathering of chefs where they completely immerse themselves in a culture, cook together and share skills, knowledge and ideas. Check it out, it’s pretty cool.

What do you love about Baltimore?
SG: I love that there’s so much going on but there are still so many possibilities. Our food culture is coming into its own. And it’s much broader that just fine dining. We’re really well-suited for other forms of food and dining.

What do you love about food?
SG: Well, I certainly love to eat. And you know, that moment when the meal is coming. The expectation is really great. I’m a restaurant guy through and through.

What are some of your favorite restaurants in the City? And, where in Baltimore would you take Amy for a date night? No kids…
SG: Thames Street Oyster House for sure. Eric Houseknecht is really talented. He executes great food. For date night, we really like Tooloulou at Belvedere Square. We went there for my birthday – Sean is doing great things there.

Okay…obligatory…when you cook at home, what do you like to make? Do you cook with your kids? Do you have a favorite ‘go to’ meal at home?
SG: We don’t really have a ‘go to’ but we do like to do big platters of lots of different things like steak and salad, potatoes. (Katie especially likes steak, Finn is a chicken guy.) We like to share it all. We also really like tacos. We don’t get to eat as a family as much as we’d like, but we definitely try. You do what you can.

Leek, Potato and Fennel Soup (with Bacon!)
Next Post:Waverly Market – year round goodness