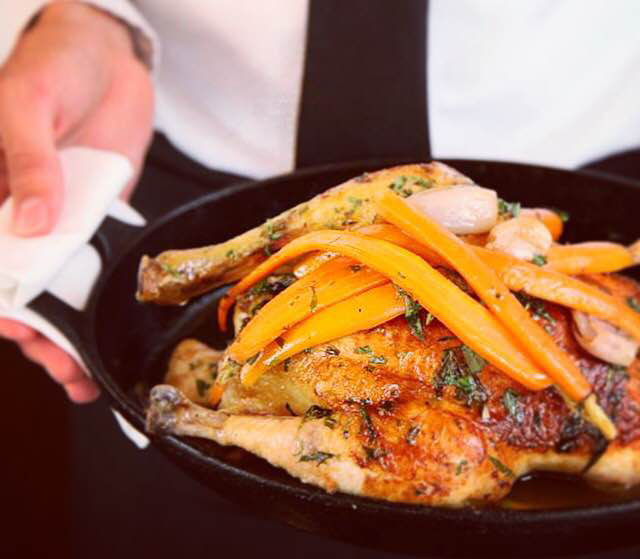 Every once in a while, I meet a Baltimore chef who’s actually from Baltimore. That’s nice. They already know the city, understand the vibe. It has to be hard to come into a city you’re not from and really understand your audience…that takes some time. Chris Scanga of Petit Louis had a leg up. He grew up here and went to Calvert Hall College (you know, that “Where’d you go to school question…) and then onto CIA. He knew he wanted to be a chef.

Between his first and second years at CIA, Chris did an externship at Baltimore’s premier fine dining restaurant, Charleston, in Harbor East. From the vantage point of a busy, high end restaurant, he could watch the ebb and flow, see how it all works. He learned a ton and before he graduated from CIA, Chef Wolf offered him a job at Charleston. That was 2009. He worked at Charleston for three years, then planned to move to New Orleans. He staged in San Francisco, researched a possible move to New Orleans and then, Chef Wolf called. She was hoping he’d come back to work for her. Um, yeah. He said yes.

Chris went through management training at PAZO and that was great. Chris said, “I mean, that place. It’s huge and extremely busy – we’re talking 500-600 covers a night. The pace, the volume, different cuisines. All at once.” He did that for about four months, then worked at Johnny’s for their first year, then he wanted again to have a change of scenery. Chris and (then girlfriend) Charleston server Carmen moved to Los Angeles. He stumbled on a new restaurant opening in Downtown LA, Coco Laurent, and cooked there and helped them open. It was a satisfying experience to be able to help a restaurant get off the ground. They lived in LA for about a year and then, happy news…Carmen was pregnant! So, back home to Baltimore they came, wanting to be near family and friends as they started their family. As they waited to take off on their flight home, Chris texted Tony Foreman. His reply? “We’ll find a place for you. Come on home.”

Chris worked as Executive Sous Chef at Petit Louis for six months under Chef Michael Kirk. Then, Chef Kirk moved on and Chris was promoted to Executive Chef in December 2013. Nice, it all had worked out. Was food a big part of your upbringing? Did you cook when you were a kid?
CS: Yeah, definitely. My mom’s claim to fame is her chili. It’s pretty legendary with me and my friends. Everyone remembers it. Growing up, my house was kind of the “cool” house. Everyone hung out there, you know? In the morning after a night of fun, my mom would wake us up with the smell of bacon and eggs from the kitchen. It was the best. In high school, I learned to grill and fry lots of good things. Nothing fancy.

Lots of kids get to choose their birthday meal…anything they want (to a point, I suppose…) What would be your birthday meal now? What did you ask for as a kid?
CS: I always loved going out for ribs. The Charred Rib was a favorite. Now, I like to have Carmen make Mexican food. She’s Mexican, so it’s the best. She learned from her mom in Mexico. I can’t touch her cooking when it comes to that. I don’t even try.

Who to you balance home and work? I guess days off are big. Do you even have days off?
CS: Well, we try to keep Sundays free as family day. We have a little boy, David, who is one. I have to say, though, I do a pretty mediocre job of balancing it all. I just try to focus where I am needed at the time – that’s really the best I can do for right now. When I’m needed at home, I’m there. My wife is amazing. Since she works in the industry, she totally gets it. As soon as I get rich, I’ll make it all up to her. (Laughs)

Are there any chefs you really admire?
CS: Wow. I guess someone like Grant Achatz (Alinea, Chicago) He battled serious illness – I mean, he’s a massively talented chef and he almost lost his sense of taste. And he came back better than ever. Also, I have to say Chef Wolf (Cindy Wolf of Foreman Wolf Group, Charleston…) is amazing to me. She, too, was pretty sick and beat cancer and just has been nothing but nice to me. She and Tony have both treated me so well, like family. I’m so thankful for that.

What do you like about Baltimore?
CS: You know, the quirkiness. We have some real weirdos here and I love that. I lived in LA and that’s pretty weird, too. But seeing the world through the filter of John Waters is pretty great. It just feels so comfortable for me here. Everyone is just real.

What do you love about food?
CS: Everything. The taste, the look. How it makes you feel – for me, it’s not just about sustenance. It’s an excuse to bring people together. Nothing’s better than being around a table together. When you share a meal, it’s unifying. Everyone has to eat, so it’s not an issue of class or status.

What are some of your favorite restaurants in Baltimore? And where would you take Carmen for date night?
CS: Jack’s Bistro is a fave for sure – so creative. We also definitely go to Foreman Wolf restaurants a lot. For dinners out with David, we like family-friendly places like Birroteca – it’s amazing how so many restaurants don’t even have high chairs, so that can dictate things when we’re bringing him along. Oh, and Salt. We love, love, love Salt.

Okay, obligatory…what do you like to cook at home? Do you have a favorite ‘go to’ meal at home?
CS: Well, I do like to try and make my wife laugh by cooking Mexican food at home. I need the practice. I’m not very good at it. She just shakes her head and laughs.  (Smiles…)