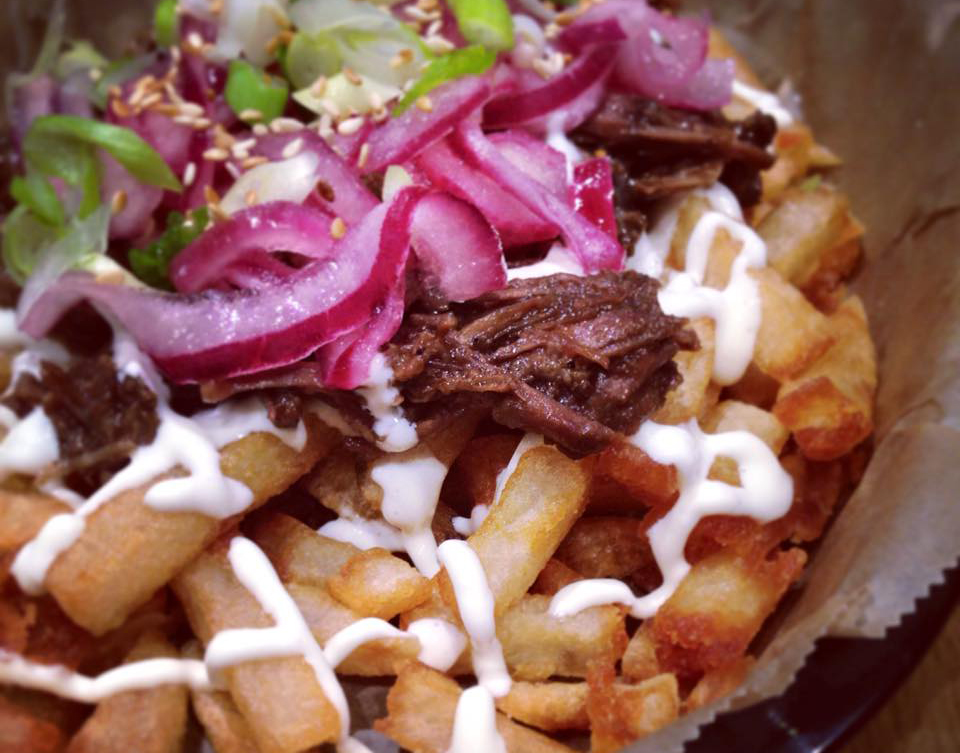 Before we talk about food, I need to tell you something. The owners of The Local Fry – Liz and Kevin – met in Paris. Seriously, I love that. I have been to Paris three times and never met my person. I don’t think he lives there. But I still love Paris.

Back in 2006, Liz was visiting Paris with a friend from college. Kevin was working in Ireland (he’s actually Irish…) as an engineer and went on a holiday to Paris. As fate or luck – or however you feel about that sort of thing – would have it, Liz and Kevin’s paths crossed in the City of Light and they fell in love. (I’m sorry, this is just too good…they really fell in love in Paris.) Let the long-distance dating begin! Liz worked in fashion design in Italy and the two visited each other and that lasted almost five years – until they decided that they needed to live in the same place. They had to figure out where to live. It was between Ireland, Italy and Baltimore. Charm City for the win! I love that almost as much as the meeting in Paris part. Okay, enough about France…well, at least, we’ll move onto French FRIES.

Liz’s parents are in the restaurant business, owning Kimmy’s Soul Food and other spots over the years. Liz’s mom needed some help at a casual restaurant that served your basic takeout like wings, subs, etc and asked Liz to come home to Baltimore to run it. So, Liz and Kevin decided to live in Baltimore and run that restaurant together and did so for five years, all along hoping to open their own place eventually. The were always cooking at home, testing recipes, saving up, planning, dreaming a bit. They both always loved cooking for people, so running their own place was something they always wanted to do.

When they thought about what was needed in the Baltimore restaurant market, fries were something that came to mind. But Liz and Kevin wanted to elevate fries, make them more than late night “drunk food.” Make them fresh, use toppings that are interesting and complimentary, like poutine (hello, gravy + fries?) and then they really got creative and had fun. Some popular Local Fry offerings include Bahn Mi (Vietnamese pulled pork, pickled carrots, daikon and jalapeño, cucumber, cilantro, Japanese mayo), Kimchi Pork Belly (sautéed kimchi, crispy pork belly, sriracha mayo, crema, shredded cheddar cheese, scallions), Irish (battered cod, caper dill tartar, cole slaw, lemon), Cheesesteak (sliced ribeye, cheese sauce, caramelized onions) and many more. That Cheesesteak, though. Close your eyes and smile with me, won’t you? Liz and Kevin are always trying out new flavor combos and they admit that not everything works. However, they learned that Asian flavors often work with potatoes, kind of like they do with rice. So that’s why they went for things like Korean BBQ, Bulgogi and Tonkatsu for example. I’m glad they did. The Korean BBQ is ridiculous. One flavor that I need to try? Breakfast Poutine – classic poutine topped with a runny egg. A runny egg! I also really liked the Chicken Bacon Ranch – sometimes, using flavors that you already know work well together is just smart.

*  They also make delicious wings with fantastic seasonings and sauces. I love the Garlic Parmesan and Honey Old Bay. I love this place. I need to get to Federal Hill more often.