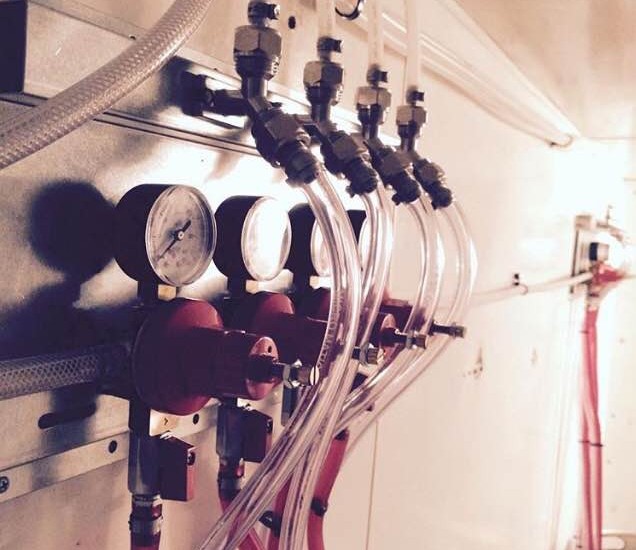 I had the chance today to visit Josh and PJ Sullivan at their soon-to-be-open beer bar, Wet City in Mt. Vernon. The brothers (along with their Dad and staff) have taken the much loved neighborhood fixure, Dougherty’s Pub, and created a welcoming light-filled bar, which will open to the public on Thursday, July 21. Hours will be 4pm-close seven nights a week and on Sunday and Monday nights, no food will be served.

As I walked into the bar – located at 223 W. Chase Street – the fresh white paint and wood flooring and design accents by Good Wood Design made the space feel open and inviting. I immediately was drawn to the shiny new tap system, which will offer 20 beers on tap, including one house beer to start. Many of the beers will be new to folks (except for craft beer nerds like Josh and PJ), as they plan to feature unique craft beers from all over the world. Eventually, they’ll brew on premise and hope to have four house beers on draft at any given time. The first house beer is “Fling”, a Black Saison collaboration between Wet City and Handsome Brewing of DC. I had a taste and was immediately impressed. (I love my job.) Wet City has a larger food menu than I had imagined they would – everything from snacks like charcuterie, popcorn and wings to entrees like burgers, tacos and shrimp & grits. The chef is Chuck Allen, formerly of Sascha’s just a few blocks over on Charles. I was immediately impressed with Allen’s laid back demeanor and smart approach to food. He and the owners want to serve food that they would like to enjoy with a beer, while also appealing to the area’s business crowd and college students.

In addition to beers, they will serve a limited number of cocktails, which is no surprise if you are at all familiar with Josh Sullivan’s creative cocktails and popular blog, Post Prohibition. They’ll start out with a Summer Shandy, a Gose Margarita and about five more cocktails.

Brendan Dorr of B&O Brasserie on Baltimore, his drink of choice and…opera!
Next Post:Wit & Wisdom’s Julie Dalton on the food + drink scene in Baltimore, the rise of Riesling and the journey to advanced sommelier