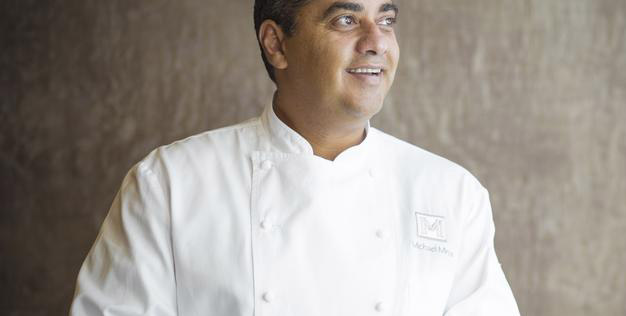 Michael Mina’s story is one of two decades of influence, passion and achievement. He has enjoyed accolades including James Beard Foundation “Who’s Who of Food & Beverage” inductee in 2013, Bon Appétit Chef of the Year 2005, San Francisco Magazine Chef of the Year 2005, as well as the International Food and Beverage Forum’s Restaurateur of the Year 2005. Chef Mina continues to dazzle the food world with bold dining concepts that have contributed to San Francisco’s reputation as a world-class epicurean destination and made him an integral part of the dining scene across the country.

It also must be noted that he is a huge sports fan – specifically, a diehard fan of the San Francisco 49ers. So much so that he recently opened Bourbon Steak & Pub inside Levi’s Stadium and at each home game week, he hosts guest chefs from all over the country at his huge tailgate parties. They’ve had everyone from José Andrés to Thomas Keller, Chris Cosentino and more. This is how a bunch of chefs do Thanksgiving, by the way… Chef Mina’s culinary and business vision led to the founding of his very successful Mina Group, with partner Andre Agassi in 2002. Mina Group has opened an astounding 27 operations, including Bourbon Steak in DC and Wit & Wisdom in Baltimore.

I’ve had to distinct pleasure of meeting Chef Michael Mina on several occasions when he’s visited Baltimore. He’s very warm and genuine, yet extremely focused, hardworking and driven. Having him cook for me was an incredible food experience – I can still see it in my head. His attention to detail is amazing. The flavors, perfect. And, he is just a really nice person. Seeing him feels like you’re seeing an old friend, so having the chance to sit down with him at Wit & Wisdom earlier this year for an interview didn’t feel like an interview at all.

Was food a big part of your upbringing? Did you cook when you were a kid?
MM: Yes, definitely. Not cooking as much as the culture of food. We’d have these huge four hour dinners, my mom had seven siblings. My mom’s Middle Eastern cooking was the best.

Lots of kids get to choose the meal on their birthday…anything they want (to a point, I suppose…)  What did you have when you were a kid?
MM: Yeah, my mom would always make her version of pizza, using really thinly rolled out pocket bread. We’d top it with spicy tomato sauce and caramelized onions. We’d also have feteer, which is dough that’s pan-fried with clarified butter and powdered sugar. And, burgers! We always loved having burgers. Still do.

What do you love about San Francisco?
MM: (Smiles big.) Wow, that list is so long. It’s a magical city. I wouldn’t trade living there for anything. No other city like it – especially for my industry. To have the combination of access to amazing products (meat, seafood, produce, wine, etc) and the clientele we have? It’s unbelievable. And personally, it’s great, too. My wife, two sons and I live out in the country and the lifestyle there is the best. When you work as hard as we do, it’s important to have fun when you’re off, spend time with family and remember why you’re doing this work. At home, the boys ride dirt bikes, we go fishing and have a huge garden. We grow tons of varieties of tomatoes, peppers, cucumbers, herbs and more. With the northern California climate, it’s year-round. We are so lucky.

What do you love about food?
MM: It’s endless. It can do so much, heal people, make them happy, bring them together. It inspires, it creates memories. People really do live to eat (especially people like me) so the older we get, the more we appreciate it – and the more we need it, too.

What are some of your favorite restaurants?
MM: Masa. I love tradition. Every time I go to New York City, I have to go there. Also, wherever (Mina Test Kitchen Chef) Adam Sobel is cooking – I like to see what he’s doing. He’s got a special way with food. Others I try to visit every few years? Classics like Le Bernadin, The French Laundry, Daniel.

Okay…obligatory…when you cook at home, what do you like to make?
MM: I love to cook over wood. We usually pull things from the garden, maybe I’ll bring home some dry aged beef, maybe some fish or pork. We do a lot of pizza, too, creating Middle Eastern flavors using Cali ingredients.